Yesterday felt very autumnal and while I love being cosy in doors with the heating on, a cup of tea, a Netflix binge and cuddling up with Tom, I also miss the warm weather and the excitement of going on holiday. I love the lead up to Christmas – there’s always something going on, but come January, everyone is depressed and it seems like the longest 31 days in the world. Last year, Tom and I went to Barcelona in November and we adored it! It’s a city I would definitely go back to, even if it was just for the Tapas. It’s no hyperbole to say that it was Michelin standard and the most reasonably priced high quality food you’re ever likely to experience.

I stayed in the Gothic Quarter and would highly recommend it. There are hidden gems throughout medieval part of the city, and the famous cathedral is situated there. Walking down ‘La Rambla’ on the first evening, I felt enchanted and in awe of the tall buildings and quaint little shops scattered along the streets. ‘La Ramble’ is often referred to as Barcelona’s most famous street. Many of the buildings had carvings engraved in them, and the city have done a fantastic job of preserving them as they’re in keeping with the city’s history and modernity.

I stayed in an ‘Airb&b’ during my visit and the host, who was local, told us that the gothic quarter adopts its name from the Romans as it was known as the ‘Roman village’. You can see this from the straight streets. The Gothic quarter is like a maze, the difference being, it is a joy to get lost in it. The tall buildings allow the sun to poke through, warming your face and evoke the sense of tranquillity. It is a popular destination for tourists and locals. One of the attractions is the fact that the Port of Barcelona is only a 5-10 minute walk away, depending on where you’re staying.

Now let’s talk about food. When you visit somewhere new, finding somewhere nice to eat is painstaking. When you go to Spain, the obvious thing you want to eat is Tapas and Paella. Tapas literally translates into ‘little dishes’ and it is my favourite way to eat. There’s nothing better than sitting eating Tapas with your friends, family or loved one, with the air still warm and a cold bottle of Cava waiting to be consumed. 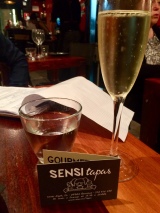 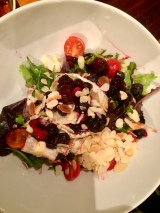 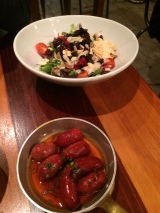 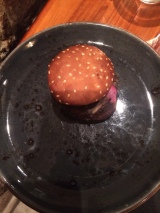 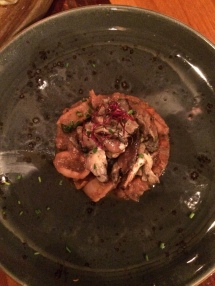 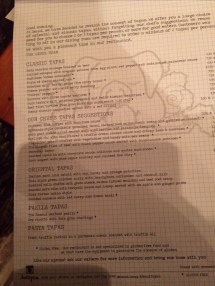 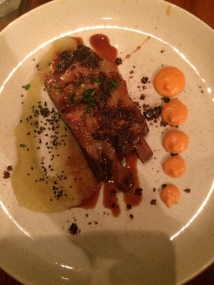 The first night we were there, we headed out to eat around 8pm – quite early for the locals we were informed! There was only one thing on my mind; Tapas. The trouble was, we didn’t know which one to go to. The street we were on, ‘Carrer Ample’ was a short distance from the Port so there were plenty of restaurants to choose from. We had already been recommended one place to go by a friend, but that was in another part of the city. The first few we dismissed as they weren’t busy and the menus didn’t blow us away. Halfway up the street we came across a small, traditional Spanish restaurant with a menu that sounded scintillating and unusual. And this is one of the restaurants I want to recommend.

When we sat down, we were the only English people in there – the rest were locals. Which, in my opinion, is always a good sign. The waiting staff were brilliant, they spoke amazing English and it makes you feel so inferior when abroad and we expect them to communicate with us in our mother tongue, but we can only say a handful of words in theirs. The restaurant was called ‘Sensi Tapas’. It is part of what we would refer to as a chain here ‘The Sensi Group’ and they have four restaurants in the vicinity – each putting their own modern twist on classic Tapas dishes. They also have dishes that lend themselves to Asian cuisine such as Roasted pork ribs with teriyaki sauce and honey, served with an apple and ginger purée and Thai style green chicken curry with lemongrass, coriander and coconut milk. The meat was so succulent, you could pull it apart with just a spoon. It was an incredible place to eat, particularly as the kitchen looked like the size of matchbox! The menu also consists of vegetarian dishes that really are sensational. They make a simple salad exquisite by turning everyday ingredients such as goats cheese into a mousse and keeping their prices more than affordable. The trouble is, there’s so many delicious things on the menu, you will want to try them all. We almost did. At another one of their restaurants, we tried a dish of smoked Iberian pork loin and I can honestly say, it is one of the most sensational things I have ever eaten. 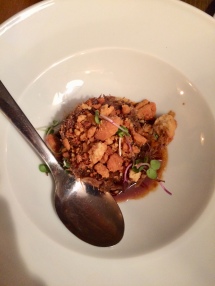 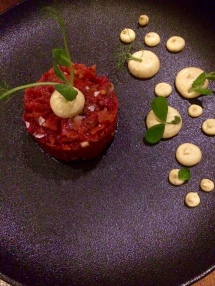 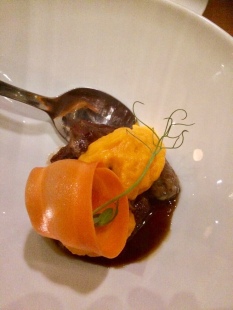 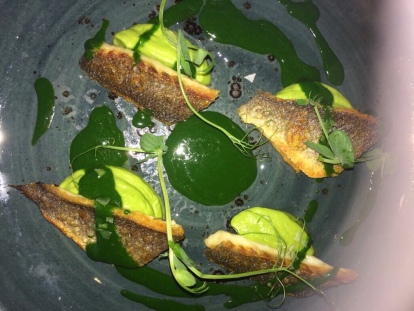 The ‘Sensi Group’ produced Michelin star style food and it was the perfect place to dine and feel like a ‘local’. You couldn’t ask for better quality food or service. The staff are friendly and attentive. They recommend certain dishes that do not disappoint.

The other most famous food in Spain is Paella. You would think that going to Spain it would be easy to find a good one. Unfortunately, not. I’ve been to the country numerous times and I’ve had poor efforts to say the least. Down at the Port of Barcelona we had a seafood paella that was everything I had been looking for on my previous visits. The port is relaxing and an enjoyable way to spend an afternoon basking in the sun. Even in November, temperatures were still at a balmy 20 degrees. 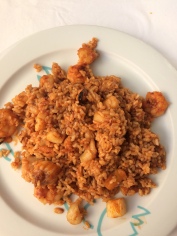 While we were there, I was also able to cross something off my bucket list. We went to the Nou Camp to watch Barcelona play Sevilla in La Liga. Lionel Messi is one of the best players the world has ever seen and as a football fan, I have always wanted to see him play at the Nou Camp before he retired or moved on. It was the only night we were there that it rained torrentially, but luckily, Tom had booked us really good seats and we were under cover, not in the heavens getting soaked and barely seeing a thing! We went at the wrong time though. There was a very subdued atmosphere due to the political protests and a lot of the fans appeared to be having a silent protest during the game.

I don’t know why it has taken me so long to visit the Catalonian capital but I will be going back there – particularly for the Tapas and the wonderful streets of a medieval city.

A food and lifestyle blogger. View all posts by gemmatidmarsh

P A R I S 🗼🇫🇷😍🤩💙🔐🌘✨💫 A year ago today, @hawardtom and I were in Paris. It’s one of my favourite trips we have been on and I totally fell in love with the city. Can’t wait to go back 🥰🤩🤪
G R A T E F U L ❤️🥰👩🏻‍🤝‍👨🏽🌊💫🌈☀️ Forever grateful that we met and fell in love 😍
P I N C H O F N O M 🌭🍟 The other night we tried the ‘sloppy dogs’ from the new @pinchofnom book 📖 and they were seriously good!! I have always said the Cajun dirty rice was my favourite recipe of theirs, but this one trumps it! @hawardtom demolished his and so did I! I also had the leftover meat with rice for lunch yesterday so it was definitely a winner 👌🏻😍🤪😋
F R O S T Y M O R N I N G S ❄️🌖🌅 The sunrise was so stunning this morning 😍 it was worth leaving the house early for this! 🤩
B L U E M O N D A Y 💙🥰🙌🏻🤗👍🏻 Apparently the most depressing day of the year. Here’s your Monday reminder to stay positive, embrace whatever the day throws at you and to set new goals for the week!
D I R T Y C A J U N R I C E 🌶🍛 This is one of our favourite @pinchofnom recipes and we had it for the first time in ages the other night! It’s great because there’s always leftovers to have for lunch the next day 🤪😋
W I N T E R W A L K S 🌳🍂 We love taking Hendricks to different places, and we recently took him to Highwoods country park. He got so muddy but had the best time!
A T P E A C E 🌊🔥🌅☀️🌗 I love that the evenings are getting lighter, it definitely improves my mood. Plus, I’m off now until Monday and what’s better than a 3 day weekend? 🤪🍾🥂